Being Great: Choosing the Down Escalator

“If you are not successful, then I fail.”
Johnetta Wiley

Last Sunday during our church service, the pastor began her sermon with the following question: “Why do you work so hard?” What an apt question to ask of so many educators I know around the world, who are among the hardest working people on the planet. She went on to spend much of her remaining time exploring the question, suggesting that the answer for many is that they wish to become great. She then devoted the bulk of her remaining time exploring what greatness really looks like. Frankly, much of what follows is taken from her sermon along with my own thoughts on how this applies to educators and leaders. 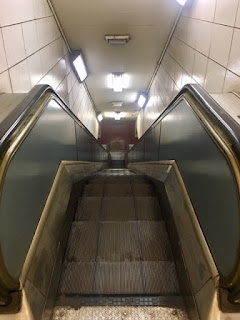 descending the ladder of service. The truly great and successful people I have encountered across the nation in hundreds of schools and thousands of classrooms epitomize this concept, consistently focusing on the latter and not worrying much about the former. Somewhat ironically, but not surprisingly, these same great people who are keenly focused on others, rather than their own success, are the ones we most often look up to as truly great. They embody the spirit suggested in Wiley’s quote above, worrying less about their own success and more about the success of those they teach and lead. Moreover, they understand that no matter how “successful” they become, they ultimately fail if they have not helped others to become great.

An overriding trait of truly great and successful people is a focus on service and serving others, not themselves. Such service is displayed through many actions and by many character traits. Servant educators share with others, they care about others, and they love what they do and with whom they serve. They create environments marked by joy and belonging and they model vulnerability. They treat others with dignity and respect and practice authentic empathy. They are present in the moment and assume the best of others. They give--without expecting anything in return. By serving in these and other ways, they often, in time, become recognized by those who know them as truly great educators yet that is never their “why” behind what they do. Their “why” is to ensure that those they are serving become great. They ascend by descending the ladder of servanthood.

“Great” is a word employed so frequently in our society that we risk rendering it meaningless. But my friend Dwight Carter--an educator I consider not only a “great” educator but a “great” person--took the time to define it, partly, in fact, because he, too, feared that telling others to “Be Great” held no real meaning over time. Dwight has written and spoken extensively about his model for greatness, using the following acronym to describe what it means to “Be Great”:

Obviously, Dwight expands on each of these at some length when discussing the topic, but simply put, being grateful, relational, enthusiastic, authentic, and teachable are indeed characteristics of great educators. They are also characteristics of servant educators. Great teachers and great school leaders know that it is not about them. Instead, great teachers know it is about helping their students become great and great school administrators know it is about doing everything in their power to help their teachers become great. Rather than focus on themselves and climbing up, their laser focus is always on how they can best serve others, right here, down on the ground all around them. 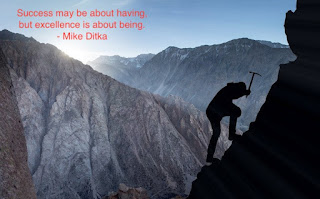 So why do you work so hard? I suspect that for many of you reading this, the answer is you want to be great and you want to achieve such greatness through service to others. It seems that we throw the terms “great” and “successful” around pretty loosely in all areas of society, including in our schools. The truth is, in all likelihood, that Jim Collins is correct in suggesting we have a whole lot of really “good,” but not that many truly “great,” organizations. Those that are truly great achieve their success because they are staffed by individuals who choose the down escalator of service rather than always looking up to the next rung on the “ladder of success.” These people know--as the Ditka quote above suggests--that success is not about having, but about being, including being a servant educator, eschewing the climb up the ladder in favor of the journey down to servanthood. Choosing the down escalator to serve our students and each other in our schools is another way we Teach, Learn, and Lead with Passion!

By Jeff Zoul at Friday, September 28, 2018
Email ThisBlogThis!Share to TwitterShare to FacebookShare to Pinterest