“He is a wise man who does not grieve for the things which he has not, but rejoices for those which he has."
Epictetus

Ever since I first became an educator many years ago, one of my core principles has been related to expectations, specifically establishing high expectations first and foremost for myself and then for every student and staff member I served as a classroom teacher and administrator. Having high expectations for myself and others with whom I interact remains a core value. Having said that, it is inevitable that, at times, we (or others with whom we have a relationship) do not meet our expectations. What happens when we fail to realize such dreams?

Recently, I attended a concert at City Winery in Chicago featuring someone I consider among the greatest living songwriters in the world, Michael McDermott. In addition to being an outstanding singer, guitarist, pianist, and songwriter, McDermott is also a gifted storyteller. Halfway through the concert, he began telling a story about his initial meteoric rise in the music industry. He was a very young man represented at the time by the top agent and top manager in the entire industry. His first album was a huge success and his manager told him he would be playing the United Center (where the Chicago Bulls and Blackhawks play) within five years. Well, things did not exactly turn out as planned for Michael and these lofty career expectations were never met. But McDermott spoke that night about how grateful he was for the way things did turn out for him. He self deprecatingly said he did indeed make it to the United Center periodically--to catch big name music acts. As for himself, looking around the 300-seat venue we were in, he laughed and said, “This is my F***ing United Center!” We cheered him on and then he said something along the lines of, “You know, if we would only trade gratitude for expectations, we would all be better off” before launching into his next song.

I will never stop having high expectations for myself, for my family and friends, and for any students or educators with whom I work. I will continue to set lofty goals and encourage others to do the same. In fact, I hope we all dream such big dreams that not realizing all our dreams becomes not only possible, but inevitable, at some point along our respective journeys. And when that happens, I hope we will reflect on the dreams we have realized and all the good in our current situations, choosing to be sincerely grateful for all that we do have without bemoaning that which we do not. If we focus on what we do not have, we will never have enough; on the other hand, gratitude turns what we do have into enough.

I respect McDermott and so many others for making the conscious decision to choose gratitude for what one has, as opposed to focusing on expectations not met. In the end, things most always turn out for the better in any case. I recently had a friend interview for an administrative position she desperately was hoping to get only to be told the job went to someone else. It reminded me of how disappointed I have been each time I failed to land a position I, too, desperately wanted--at least at the time. Upon reflection, in each such instance, I now look back with gratitude that I was not offered those jobs; for me, life has had a way of working out perhaps not exactly as planned, but precisely the way it should have for my ultimate happiness. Although it is painful right now and of little comfort, I suspect that my friend, too, will look back five years hence with gratitude that she did not get this position and thankful for the position she does have at that time.

Expectations can be tricky things. Of course we should have high expectations, yet we must realize that unmet expectations can cause conflict, if we allow them to gnaw at us. In fact, Blaine Lee suggested that almost all conflict is the result of violated expectations. But we can also make the choice to not allow unrealized dreams to get us down and, in fact, to express gratitude for what we do have, rejoicing in future possibilities whenever one door closes. 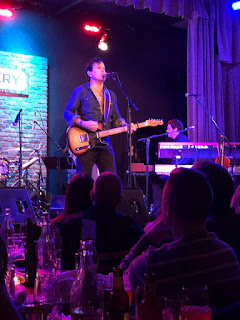 I will likely never see Michael McDermott performing at the United Center, but I am grateful to have seen him play at dozens of small venues in several states the past few years. Although most folks reading this blog post have likely never heard of him, I am not alone in my opinion that McDermott is one of our greatest living musicians. Bestselling author Stephen King has said of him: "Michael McDermott is one of the best songwriters in the world and possibly the greatest undiscovered rock n roll talent of the last 20 years.” (Speaking of Stephen King and unmet expectations, when I published my first book, one of my colleagues said, “Jeff, you are going to be on Oprah with this book!” Needless to say, I never did make a guest appearance on Oprah. However, I am extremely grateful that, together, books written by Stephen King and me have sold over 350 million copies!). Despite King’s (and mine, for what it is worth) high praise of Michael’s songwriting skills, he appears destined to continue playing small venues in his career, rather than large stadiums. Although some might resent this, I am glad that McDermott chooses gratitude, not bitterness. And I can guarantee him that the 300 people who heard him at City Winery in December appreciate him as much as--if not more than--the 20,000 people who heard Josh Groban recently at the United Center.

As we begin another new year, I hope everyone continues to dream big dreams and insist on high expectations for themselves as well as others with whom they serve. As important as this is, however, I hope even more that 2019 finds you choosing gratitude throughout the year for everything you have, everything you accomplish, everything that comes your way, and, even, for the inevitable disappointments you are sure to face while pursuing your dreams. Having high expectations--yet trading gratitude for disappointment when such expectations are violated--is another way we Teach, Learn, and Lead with Passion!