“The key is not to prioritize what's on your schedule, but to schedule your priorities.”
Stephen Covey

Since “retiring” from full time public education service in 2017, I have had the privilege to co-author several books, speak to thousands of educators around the country, and work in several schools as a coach. In addition, I have served as a short-term interim administrator. These experiences as an interim principal have been richly rewarding; being back in a school every day--albeit on a temporary basis--rejuvenated me and reminded me just how challenging (and rewarding) it is to serve as an educator in any role. My last full time principal assignment was a decade ago; taking on this leadership role again, I found myself doing many of the same things I did years ago. On the other hand, I found myself doing some of these things quite differently. How I behaved was directly related to my priorities in this new role. I was determined to be intentional about scheduling my priorities as opposed to prioritizing what was on my schedule.

On my first day as an interim principal, I decided to do what I had always done as a full time principal: I went outside to the car rider line and shook the hand of every student arriving to the school between 7:45 - 8:15. As a principal, I always prioritized this on my schedule for several reasons, including:

I am well aware of the many reasons why it is difficult to do this every single day as a school administrator, but I encourage all principals to simply prioritize greeting students each morning into their daily routine in spite of the many competing demands on their time. When I started doing this as an interim principal, several parents actually took the time to get out of their car to thank me for doing this. I had others take photos of me shaking their child’s hand in the morning. One morning, a parent walking into the school told me, “What you do out here every morning is the talk on the streets of our town.” I am convinced that this simple daily routine is a difference maker for school leaders and we must schedule it as a daily priority. 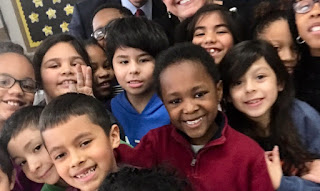 When I was a full time principal, I also met with students who misbehaved, were chronically tardy/absent, or were underperforming academically. On my first day as an interim principal, several teachers immediately asked me to do this, too, indicating a particular student about whom they were concerned. I decided to approach the situation much differently than I had when I was a full-time principal. When I was a principal, I was often so “busy,” that I failed to prioritize an adequate amount of time to these situations, instead merely checking them off my to-do list. Upon reflection, I am not proud of this, but often I would simply call the student in, quickly “address” the issue, and send the student on his/her way. As an interim principal, I decided to take a different approach. Instead of merely checking the task off my list, I decided to make it a priority to actually work with the child to resolve the problem. I spoke with the student for almost fifteen minutes, mostly serving as an active listener. I then called the student's mother and spoke with her for another fifteen minutes, again listening very carefully. Then, I turned back to the student and spoke with him for another ten minutes. Together, we came up with a goal, a plan, and a mutual commitment to follow through. I checked in with this student almost daily to reinforce expectations, see how he was doing, and celebrate success when appropriate. Although meeting with students who were struggling in different areas was something I did as a full-time principal as well as an interim principal, the way in which I did this changed dramatically--and for the better. The difference? As an interim principal, I prioritized doing whatever I could to actually solve the problem, instead of approaching it as a task to be completed.


Many of the things we must do as school leaders should change over time; we must constantly be on the lookout to innovate as leaders not by merely doing things better, but by doing better things. At the same time, there are certain things we must do as school leaders that we will likely be doing as long as we have schools. For these things, we should continue to strive for improvement, doing what we do tomorrow better than we do it today. Being visible during school arrival time is an example of doing a better thing (if, instead, we currently devote that time to attending meetings or catching up on work in our office). Meeting with students to actively listen and then design a plan for success when they are struggling (rather than simply meeting with them to assign a consequence) is an example of doing things better. In each instance, the key--as Covey reminds us--is not to prioritize our schedules, but to schedule our priorities. In our book, The Principled Principal, Anthony McConnell and I make the case that how we manage many competing responsibilities is not only a challenge, but an opportunity. How we approach this challenge can significantly impact how successful we will be as school leaders. Scheduling our priorities is a key to success and another way we Teach, Learn, and Lead with Passion!